John, Your brick was made by the Coffeyville Shale Brick & Roofing Tile Co. circa 1902-1904.  In 1904, the Roofing tile part was dropped from the name and the company continued to operate till 1916.  It is entirely possible that they continued to make the sidewalk brick after 1904 as the plates would last for some time.  I an enclosing two photos of variations of your brick.  The light was wrong when these photos were taken so that they appear to be raised instead of recessed letters. 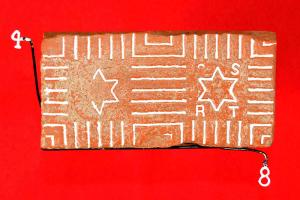