Globe Press Brick Co. Started in 1905 by the Weatherford family

Ferris Press Brick Co. On west side of railroad. In 1930 the buildings were being removed

Note: The distances indicated are from the post office when it was located on 6th Street where Cash & Mail Emporium is located now.

I worked in the brick plant for my uncle; our family owned part of the Ferris Brick Company. We got up at 4:00 AM to work on the kilns where bricks was made. They were fired for 28 days. Gas jets fired the bricks; we wore asbestos shoes and could stay under the tin roof only about 20 minutes because it was hot (≥110AF), and dehydration was a problem. Later in college, I thought the studies were very hard but never as hard as working the kilns in the brick plant. circa 1948 Interview with Wilson Weatherford MD - http://www.ncbi.nlm.nih.gov/pmc/articles/PMC1276645/ 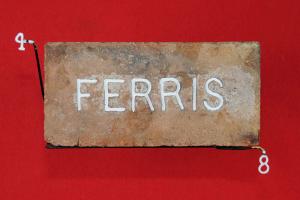