A 50-man workforce once produced 54,000 handmade bricks a day at the Medora Brick Plant. Founded in 1904 the company built a plant and began brick production in about 1906.

The company had chosen a parcel of land one mile outside city limits southwest of the small town of Medora. The plant was surrounded by hills containing a ready supply of material for brick production.

The B & O Railroad tracks at the edge of the
complex carried Medora brick initially to pave streets throughout the Midwest.

In 1924 after financial troubles stemming from an economic slowdown prior to the Depression the plant went into bankruptcy. It was purchased at auction by the owners of Jackson Brick & Hollow Ware Co. of Brownstown, Indiana. Thereafter the Medora plant concentrated on wall brick for facing new buildings while the Brownstown company focused on drain tile. Joseph Robertson served as President of both companies until about 1941. After WWII James P. Heller became President.

The plant operated between nine and ten months out of the year producing standard and custom brick until it officially closed January 31, 1992. Medora resident today, Bernard A. Gray worked the plant since 1946 and was Superintendent for the plant's last 24 years of operation. His father Ralph was superintendent before him beginning in about 1935. His brother Erridine served as the plant's salesman. Bernard Gray knows brick. Especially Medora Brick! Several interviews with Mr. Gray are included in this website along with photos from his personal collection.

The company had over the years built a complex of 12 brick kilns with 7 tall square stacks complimenting them. The round, domed (beehive) kilns have arched doors on two sides along with 10 small openings at the their base for feeding the kiln's fire. A long, covered storage shed was constructed parallel with the rail siding. A smaller shed sat in the middle of the complex. Also still standing are a horse barn with an employees changing and showering addition with accompanying 2-holer frame outhouse, a machine shop and power plant building , walls of another brick building and the small office. The large frame shale processing & brick forming building was dismantled after the plant ceased operation. The mechanicals and equipment were taken to other brick plants in Indiana.

In 2004, the site was named to the 10 Most Endangered Landmarks list by the Historic Landmarks Foundation of Indiana. Ten domed kilns remain with 5 stacks (the 'five sisters') along with four small buildings. 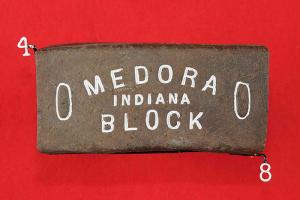