Previously identified as made by Cobb Pressed Brick Co. of Jacksonville http://brickcollecting.com/collectors_page3.htm

Here is an article from the Jacksonville Daily Progress newspaper

JACKSONVILLE — Citation of a burnt earth brick with unusual insignia – created more than a century ago in Jacksonville – on the website www.ruffbrickroad.com, is “a  distinguished professional credit” for historical artifacts that comprise the local Vanishing Texana Museum, said museum board chairman Sam Hopkins.

Which in turn, he added, “makes Jacksonville an educational center for other heritage researchers.”

According to a description of the brick, loaned to the local Vanishing Texana Museum by the Ed Aber family, it was created by Aber Brick Kiln about 1890 with a “universal Good Luck Sign.”

From an excerpt of their book in progress, “Lives of Texas Brick,” authors Jim Atkinson and Judy Wood explain that “in the 19th century world that Ed Aber knew, the raised brand within a rectangular recess on his burnt earth brick signified good luck.”

The design – a cross with equal arms that "turn" at right angles – “is an ancient symbol that evokes whirling motion, like two sticks bound together and twirled to create fire,” they write. “During the very era that Aber kiln-fired this brick, the symbol had a surge of popularity in the Western world after it was discovered during Heinrich Schliemann's excavation of ancient Troy.”

Native American tribes, particularly those in the Southwest, also incorporated the design into their culture: “Hopi and Navajo referred to it as 'The Whirling Logs of Healing,'” the book explains, adding that the symbol is called a swastika, a name that “derives from Sanskrit su (good) + asti (it is) + suffix ka (soul).”

According to the website, About.com, “until the Nazis used this symbol, the swastika was used by many cultures throughout the past 3,000 years to represent life, sun, power, strength and good luck. Even in the early twentieth century, the swastika was still a symbol with positive connotations,” found on items like coins and building.

“During World War I, the swastika could even be found on the shoulder patches of the American 45th Division and on the Finnish air force until after World War II,” the site states.

However, the symbol – a black swastika against a white circular field – became “a symbol of hate, antisemitism, violence, death and murder” after Adolf Hitler adopted it as the official emblem of the Nazi Party in 1920, according to the About.com website.

The swastika is still perceived as such in this country, Hopkins said, even though in other cultures, the symbol represents a more positive image.

“ When I served in Vietnam, I observed the frequent use of the swastika symbol on grave markers in Buddhist cemeteries,” he said.

“The Aber brick reminds Americans that the imprinted symbol is still used outside of Western civilization by other world religions (and it) broadens our understanding of our own recent history, as well as the practices of other peoples in other places even today.”

The unusual brick may well just become the “attention-getter” the museum seeks to garner visitors.

“(It's) one of the most interesting of the museum's possessions,” Hopkins said; this year, “it is one of the three items that have been exhibited and studied by heritage professionals.”

The swastika was/is a good luck symbol - till Hitler subverted the meaning. From http://www.luckymojo.com/swastika.html

The swastika, hackenkreuz, gamma cross, gammadion, St. Brigid's cross, or fylfot cross is a symbol found around the world. It not universally drawn either clockwise or counterclockwise, and it occurs in both curved and squared forms.

This postcard, copyright 1907 by E. Phillips, a U.S. card publisher, speaks for the universally high regard in which the swastika was held as a good luck token before use by the Nazis corrupted its meaning.

The text on the card back reads:

"The Swastika" is the oldest cross and emblem in the world. It forms a combination of four "L's" standing for Luck, Light, Love and Life. It has been found in ancient Rome, excavations in Grecian cities, on Buddhist idols, on Chinese coins dated 315 B.C., and our own Southwest Indians use it as an amulet.

It is claimed that the Mound Builders and Cliff Dwellers of Mexico, Central America consider "The Swastika" a charm to drive away evil and bring good luck, long life and prosperity to the possessor.

It should be noted that this text is not entirely accurate: The Mound Builders inhabited the Ohio River Valley and the Cliff Dwellers lived in the Southwestern United States; however, both did use the swastika, as did the Mayas of Mexico. Furthermore, although the swastika may look like four "L's" to one who uses the Roman alphabet, in Greek it forms four Gammas ("G's"), in Hebrew it can be seen as four Daleths ("D's"), and among the non-literate people of North America, it corresponded to no letters at all. Thus the ascription of Luck, Light, Love, and Life to the amulet is simply an English mnemonic, although it is prettily reinforced on this card by images of a horseshoe (luck), the rising Sun (light), twin hearts (love), and Earth (life). Finally, not mentioned in the text is the swastika's use as the specific emblem of Ganesha, the Hindu god of good luck, who is also represented as an elephant.

At left is a very nice American-made beaded item from the 1920s that bears the initials J.B.Y. and a black swastika on a white background. It is a simple strap-woven seed-bead piece of the type often made for a merit badge by Girl and Boy Scouts, or, as in this case, woven on a "while you wait" basis by American Indians for tourists at places like the Fred Harvey hotel chain in Arizona and New Mexico. It was found in an estate collection of Native American bead-work that had been put away and wrapped in 1929-dated newspapers. The twisted cotton threads terminate in a brass pin for hanging.

The use of the swastika in domestic ornament was fairly common in the 19th century. I have seen a beautiful white wedding dress, circa 1900, covered all over with embroidered swastikas. It came from the trousseau of a Polish-German immigrant woman, a "mail-order-bride" who was married in the U.S.

The swastika or hackencreuz was not a Nazi symbol originally, but was adopted by them as a "lucky" logo. (Imagine a political party of butchering madmen adopting the four-leaf clover as their symbol!) Some people believe that the swastika has been permanently co-opted or ruined by its brief appropriation by the Nazis -- who stood it up diagonally and placed it in a circle rather than running it four-square, and gave it their brand-logo colour scheme of black, white, and red, thus making THEIR swastika a national seal, unlike the non-Nazi swastikas of varied colour and form one finds all around the world.

It is a common misconception, almost an urban legend of sorts, to impute directional or positional preference or meaning to the swastika, and to claim that the Nazis "reversed the swastika" or "rotated it backwards" and therefore rendered it "evil." But this idea that directionality is important in the history of swastika usage is demonstrably untrue: counter-balancing (bilaterally symmetrical) arrays of clockwise and counterclockwise swastikas are common in both ancient and modern Indian art.

I believe that these considerations concerning the left- and right-turning swastika arose after the Nazis adopted the device -- and were part of a failed attempt to salvage at least a part of its former meaning by establishing a "good swastika versus bad swastika" dichotomy. Unfortunately, this swastika purity restoration attempt failed because ancient monuments and steles do not bear the theory out: The swastika appears in both left- and right-turned models in virtually all past cultures with no "deosil" and "widdershins" thought behind the direction, nor with "good" or "evil" concepts attached. The Nazis tipped the swastika up on end (diagonally), but it is even found that way in some old historical artifacts as well, such as this lovely example of the lucky swastika -- an embossed and airbrushed American postcard of the 1905 - 1910 era, bearing the legend "To Darling Baby," accompanied by a lavender swastika and a bunch of Lily-of-the-Valley flowers.

Some people believe that the display of any sort of swastika should be forbidden because it is offensive to Jews. From first-hand experience, i can assure you that dozens of elderly German Jews i personally know who lived through or escaped the holocaust, were and are well aware that the swastika pre-dated the Nazis and do not consider it a Nazi symbol. One thing most of them have learned -- and have taught to me -- is that RELIGIOUS TOLERANCE is a key to preventing future holocausts. Therefore they honour and respect the religious iconography of others. including the Jains and the Hindus, who revere the swastika as a symbol of a symbol of long life, good health, and good luck, and the special symbol of the Hindu elephant headed god Ganesh. My own mother, a Jew raised in Germany in the early 20th century, tells me that her family's sun-porch had an inlaid tile design of swastikas on the floor -- and her mother once told her it was "wrong" of Hitler to use the symbol as a political emblem. The swastikas were still there on the floor when she and her family fled Germany to escape. 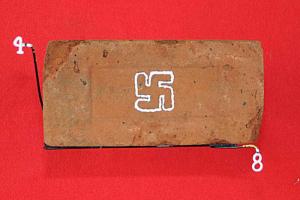