The Purington Brick Co. in East Galesburg, IL, is the original source of our Purington Pavers and Old Tuscany Bricks, which were famed for more than 100 years as premium quality paving materials.

Once the largest producer of brick pavers in the world, Purington employed 800 workers to transform blue shale and yellow soil into more than 150,000 bricks per day.

The first brick was manufactured on the site in 1849. Henry Grosscup, a German stonemason, purchased 90 acres of land from Knox College trustees, paying for it with brick which was used to construct Whiting Hall and Old Main.

Brothers D. V. and W. S. Purington purchased the land around 1890. Their kilns produced the company's signature 4"x4"x8" paving brick until 1949. They began with Yard No. 1 containing 14 kilns, and later added Yard No. 2 with 22 kilns. Eventually the company had four yards covering the area. 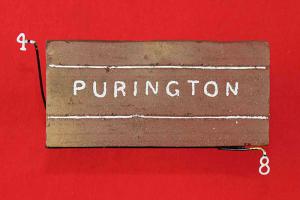