Approximately 90% of the original IMS bricks are buried under appx. 6-12" under the current racing surface. I say appx. 90% as there have been several tunnels dug under the track, to which the removed bricks are in a safe vault in the basement of the Hall Of Fame building preserved for use (if necessary). In fact, the last time the track was resurfaced (2004, I believe), the existing asphalt was dug up - including the start-finish line bricks at the time. Those bricks were chopped into small pieces and sold as expensive souvineers, and replaces with the vault's bricks.

Now - out on eBay, you may see Indy 500 bricks for sale. These are factual - they probably are. Look for mortar pieces - that'll guarantee it. These bricks are parts of the original track configuration. In the mid-30's, the track had progressive bricks that acted as a wall to scoot out-of-control cars back to the racing surface. There "was" no wall - just the hill of bricks. These were replaced with an actual wall, to which the original bricks were not thought of as historic, and were distributed (trashed) accordingly. So, if you see these bricks - and there are a LOT of them, they are probably so. BTW - the date on the Culver Blocks is NOT when they were installed, but the patent date of the block design itself.  http://answers.yahoo.com/question/index?qid=20090314103043AADAroS

The Yard of Bricks at the Indianapolis Motor Speedway is some of the most hallowed ground in worldwide motorsports.

In a span of 63 days in fall 1909, 3.2 million paving bricks, each weighing 9.5 pounds, were laid on top of the original surface of crushed rock and tar to upgrade the Speedway.Asphalt gradually was added to various section of the brick surface, with patches added to rougher sections of the turns in 1936 and all turns being completely paved with asphalt in 1937. In 1938, the entire track was paved with asphalt except for the middle portion of the front straightaway.

In October 1961, the remaining bricks on the front straightaway were covered with asphalt. A 36-inch strip of the original bricks was kept intact at the start/finish line, where it remains today as the fabled Yard of Bricks.

March 2002: Entire surface, including bricks at start/finish line, made even smoother by the process of "diamond grinding."

Fall 1995: Entire 2 1/2 miles resurfaced, following removal of 5 inches from the surface, the first occasion on which all pre-exisiting surfaces no longer remained (with the exception of portions removed upon installation of tunnels).

Summer 1976: Entire 2 1/2 miles resurfaced with asphalt, the first complete resurfacing since fall of 1909.

October 1961: Balance of brick on main straight covered with asphalt, leaving only the 3-foot strip at the start/finish line still of bricks.

Fall 1909: 3,200,000 street paving bricks laid into the sand, seperated on each side by approximately one-quarter of an inch and, after each section rolled and declared level, a mixture of equal parts of sand and portland cement poured between each brick on all four sides for "fixing."

Fall 1909: A 2-inch layer of sand placed on top of the existing damaged surface.

Spring & Summer 1909: Original surface of 2-inch layer of creek gravel, followed by 2 inches of crushed limestone topped by an application of taroid, followed by a half-inch coating of crushed stone chips mixe4d in with larger stones, followed by a second heavier coating of taroid and a top dressing of stone dust worked into the surface. 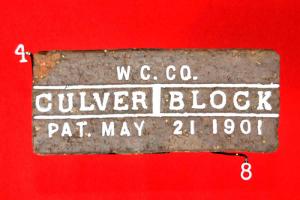